Back in 1979, Eddie did an interview with a well known guitar magazine , just as his band Van Halen was making it’s way up the ladder popularity wise.

In mid 1978, Van Halen opened for mega pop rock outfit Boston when Eddie got his first taste of the imitators.

Here is what Eddie had to say about the experience: “…Tom Scholz from Boston, we played right before them…and I do my solo. And then all of a sudden he does my solo. I was drunk and I got pissed…I started talking to the other guitarist and I told him, “Tell him (Tom) I think he’s fucked.”

Safe to say Eddie was not happy being upstaged by the headlining act.

Van Halen had achieved headliner status later in 1978 when Rick Derringer, formerly of The Johnny Winter Band, opened for them.

Mr. Van Halen saw it go down like this:  “The things I do like Eruption and Spanish Fly, I hate to say it but I came up with it. Rick Derringer opened up for us last year (1978) and he did my exact solo. After the show…I said, “I grew up on your ass, how can you do this?” He’s goin’, “yeah yeah yeah.” Next night he does my solo again and ends his set with You Really Got Me. I kicked him off the tour.”

Now we need the evidence, right?

Well, thanks to Youtube, I have uncovered some footage that basically confirms what Eddie was saying.

Check out the video below, and also as an added bonus,  I teach you the intro to Hot For Teacher by Van Halen.

See you next time! 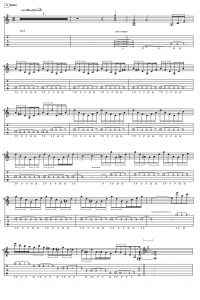