Sometimes I get on a kick and I go searching for old tunes I liked to play when I was a kid. While in the process of surfing around I found someone teaching the Jump guitar solo by Van Halen. I thought to myself, “That doesn’t sound right!” So I searched some more and found that out of the dozens of people teaching this solo online, not one was correct. Hmmmm. I then went on a search for a decent transcription of the song. After finding only a few rudimentary versions I decided to take it upon myself to publish an accurate, perfect note for note version of this solo as I am sure others were wondering, like myself, how this solo is actually performed.

This solo has many Eddie-isms which we will get into. The most interesting note I made was the key in which Eddie recorded the solo. In the video for Jump, it appears that he mimes the solo in A which I found odd since the solo section is in Bb. This puzzled me because he would have to tune his guitar up a half step above A 440 to make the pitches correct in the position he played it. Well, once I transcribed the solo, I noticed near the end of the solo that an open string rings ever so slightly and what did that uncover? The solo WAS recorded with a guitar tuned UP a half step! Shocking, I know lol! Needless to say, I did not feel like having all of you tune up a half step and break your strings so I transcribed this version as if it was played on a standard tuned guitar. That open string was omitted in the final transcript but it was so subtle I doubt you will miss it. 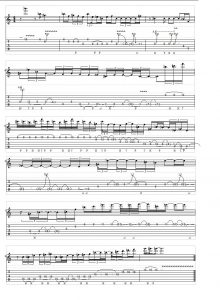 Anyway, the first part of the solo is blues based in Bb blues scale and Eddie uses what are called pick harmonics (pinch harmonics, artificial harmonics, squeals, just different names, same technique).  Below the pick harmonics I notated the pitches that they create so you will have to experiment and move the pick around to find them. If you don’t know what a pick harmonic is, please reference my lesson on this technique here

Another technique of note is Eddie’s two hand tapping pattern that starts at the end of bar 4. This lick is started by flicking the index finger of the right hand on the little E string sounding the note on fret 6. This gets the pattern rolling.

Eddie then proceeds with a tapping pattern in Bb Dorian mode and including a b5 (first note on G string) from Bb blues scale. There are several “tap on from nowhere” notes in this sequence meaning you slam your finger on the neighbouring string to sound the note, no pick needed. The toughest one for my money is the index tap from nowhere on fret six of the fifth string. It will take time to develop the strength to do this but with persistent practice it can be done.

After this there is a tiny bit of sweep picking in bar 7 (before sweep picking was just a tired cliche) and then Eddie ends the solo on another symmetrical pattern with hammer ons across five of the six strings.

The hardest part for me was trying to get Eddie’s feel which is unorthodox to say the least. Writing it down was difficult, trying to play it with his odd sense of time even more so. It is not that he plays out of time but rather that Eddie (even he admits this in several interviews) hears time differently than most people. This fact is probably responsible for why Eddie and Alex (drummer in VH) have such an immediately recognizable rhythmic feel in their music, from the ultra fast blues shuffles (Hot For Teacher, I’m The One) to the wacked out timing on songs like AFU and the backing track to the Jump Solo. The odd accents (even thought it is 4/4 time) make this stuff a challenge to play.

Anyway, I recorded the solo at 3 different speeds in the following video. 100%, 70% and ultra slow so you can see exactly how Eddie did it.