Hey everyone, this lesson I am going to talk about a blues technique known as trading 2s or its more commonly known name, call and response. Now that you have last week’s blues rhythm in A, you can record it and try this technique with some of the licks from the first few lessons we did a few weeks back or find a friend to play with and trade licks back and forth.

The idea (if playing alone) is to play a lick over 2 bars, then answer it with a different lick. If jamming with someone else, one player plays the call, the other the response, 2 bars each.

This is how you learn to organize a solo. By playing a lick, then a variation, then the first lick again, you are basically following a compositional technique from classical music called theme/variation (borrowed by blues players) except on a much smaller scale. Part of what makes a great solo is the ability to quote previous ideas in new ways from the same solo. Call and response is a basic way to do this.

I have used the 3 licks from the lesson on pos 5 blues scale which I have included here again. The first 12 bars I show how it is done then in the second and 3rd 12 bar forms I play a call for 2 bars then you play the response. It can be some of the licks you have learned from my lessons or any other licks that use the A blues scales you know. 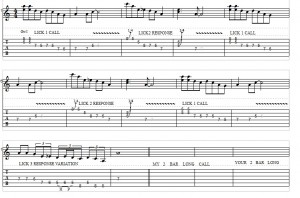