Hey everyone, today we are tackling 5 Awesome Van Halen Endings for guitar.  Video portion of lesson is at the bottom.

First up we have the ending to the classic blues “Ice Cream Man.”  In this excerpt Eddie is doing a well worn blues cliche ending that utilizes a descending line from the root down to the 5th of the key and then an F9 chord is sounded before the E9 and then the chaos ensues.  The  F9 is known as a tritone substitution (augmented flat 6 chord for those theory geeks out there) and is used heavily in blues based music.

The first part of the phrase that follows this is based off of an E major type scale (probably mixolydian) but it ends up just being a shape that Eddie moves across the fretboard known as a “symmetrical shape” which Eddie employs in his playing often. Check out this lesson I did a while back on Eddie’s use of symmetrical patterns for a deeper explanation of how to use this technique https://vancouverguitarlessons.net/2017/04/15/11-hacks-play-like-eddie-van-halen-part-2/

Fig. 2 You Really Got Me

This ending starts with Van Halen borrowing the ending to The Who’s “Won’t Get Fooled Again” but Eddie spices it up on the last chord doing an E7#9 chord to take it to another level.  The licks Eddie is using in the first 2/3 of the phrase are from E Dorian mode but then he breaks into E mixolydian in the sliding portion of the lick.  The hardest part of the lick is the notes on the D and G strings in the fast portion of the lick. I would recommend just working on the 3 note pull off on the G string then the next 3 notes, over and over.  Keep the picking pattern the same (I pick the adjacent notes on the D to G riff “down-up-down.”  This will make it easier to gain speed.

On this ending Van Halen pulls out some tremolo picking and right hand finger slides to mimic video game sounds from the 80s.  Check out a previous lesson on Eddie’s tremolo picking technique to gain more insight on how this technique works by going here https://vancouverguitarlessons.net/2017/03/28/11-hacks-for-playing-like-eddie-van-halen-part-1/

The ending to this Van Halen classic is based on D blues/mixolydian scale.  Eddie loves to mix scales when he solos and this is a good example of that.  He clicks on an octave pedal once the sliding section begins. 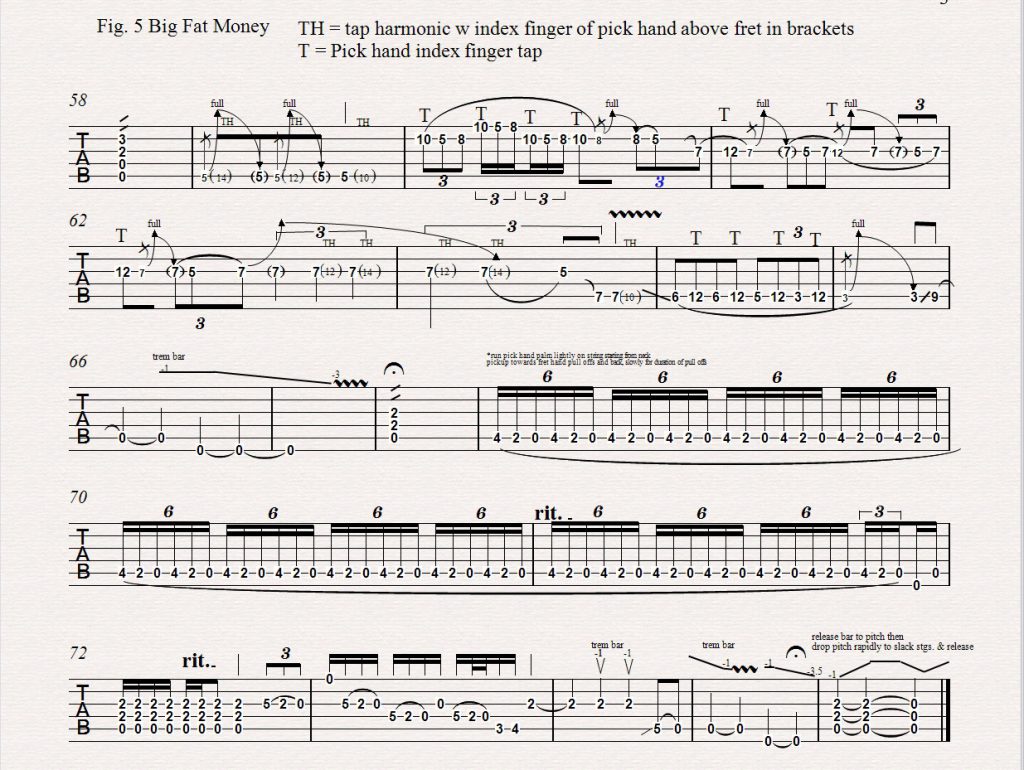 Eddie pulls out a few more goodies from his bag of tricks here employing two hand tapping, tap harmonics, and his infamous overtone technique.  Eddie is primarily drawing his lines from the A minor blues scales and A major blues scales here.

Anyway I hope you have enjoyed this lesson, check back often for new lessons. 🙂