By fearzero Guitar Lessons Sep 18, 2018 Comments Off on 10 Hacks To Play Like Yngwie Malmsteen

Thanks for joining me, this time we are talking all things Yngwie Malmsteen! Below you will find 19 musical examples, explanations on Yngwie’s technique, theory etc. and a video that demonstrates each example.

I have been thinking about doing a video on Yngwie for a long time now as he has been one guitarist I have always admired from afar but never put much time into learning his licks as it just seemed far too difficult.  He played with what seemed like reckless abandon, but with such command and sheer speed and accuracy that he literally dropped the jaws of guitar aficionados around the world when he first arrived in the early 80s.  Well, fast forward a few decades and throw in the fact I got a great deal on an used Yngwie Malmsteen Strat from 2006 and here we are.  Well, add about 7 months of research, transcribing and practice to that and ya, here we are lol!  Anyway, I am very proud to bring you my “10 Hacks To Play Like Yngwie” video lesson.  I hope you enjoy it and get as much out of watching as I did in making this video.

Yngwie is fairly bare bones when it comes to effects.  His main overdrive sound is a DOD250 overdrive and he prefers the grey era model (70s) as it has increased bottom end.  Live and as evidenced on ‘Black Star,” Yngwie does use delay for an effect similar to that used by Eddie Van Halen on his intrumental “Cathedral.” Yngwie uses a Korg DL-8000R delay unit, but any digital delay will work.  For the “Black Star” example I am using a Boss DD3 from the late 1980s.  The settings are 100% effect (that means the output of the effect is equal to what is input), a 350ms delay setting and no feedback so just a single repeat.

Another effect Yngwie likes to use sparingly is a Crybaby Wah (I am using my Vox in this example though).  He likes to bust this out on his bluesier passages in songs such as “I Don’t Know” and on “Spasebo Blues,” his ode to Hendrixian type blues.  Yngwie has used this effect as a filter (as heard on the example) but he also does use as an accent like some of the blues rock greats such as Clapton or Hendrix would use it.

As for amplification, Yngwie uses old Marshall 100 watt ‘plexi’ amps . In this video, I am using a reissue 1959HW.  When the tubes fried on that part way through the making of the vid, I moved to my Soldano Hr50+ which seemed to do a good job as well.  The guitar Yngwie uses is a scalloped neck Fender Stratocaster and he has 3 different variations of his signature guitar on the market.  The guitar I am using is from 2002 (no bullet headstock).   Google around and you can check out the reviews of each one.  Contrary to what I have seen around the ‘net, I think the scalloped fretboard DOES increase the ability to play faster once you get used to it and it makes sense.  Less friction (the fretboard is scooped out between frets) = more efficiency. I definitely notice it.

Yngwie has been known to use harmonic minor, natural minor, pentatonic and blues and even some major and harmonic minor modes, but he primarily sticks to harmonic minor and it’s 5th mode Spanish phrygian. He also does a mixed minor scale where he adds the b7 to the harmonic scale and you can see that in the lick from “We’re Stars” in the “Systematic Picking” section.  I wrote the scales out in the fashion he might play them. 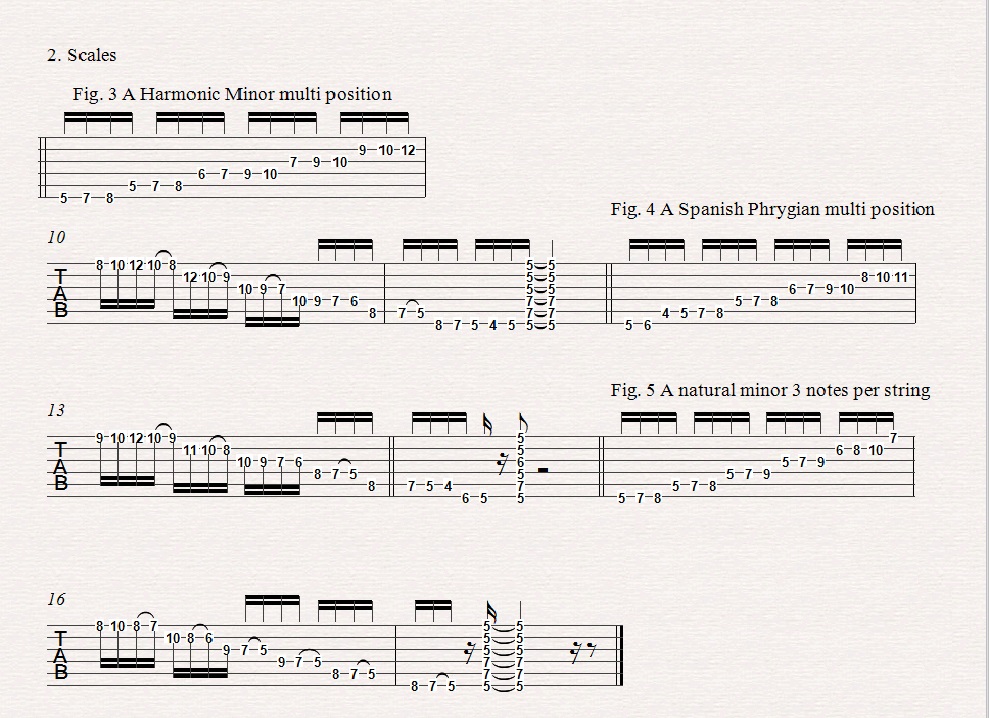 Yngwie might seem to be playing super fast and just picking every note, but that is definitely not the case.  When you read about him and hear him interviewed, he shrewdly says he is not aware of any pattern he uses, but slow motion video reveals that he is not really being honest about that.  Yngwie came up with a system, particularly on descending phrases, that works extremely well with harmonic minor and mixed mode passages.  What is the system?  Well, when he is playing a fast descending phrase, he almost always alternate picks all notes on a string where an even number of notes are placed and when a group of 3 notes arises he alternate picks the first 2 notes and pulls off the 3rd note. This little move makes it sound like all the notes are picked but that would be far more difficult so it is rather deceptive.  This one hint will make playing Yngwie’s riffs much easier if applied the right way.  Of course Yngwie does deviate from that approach sometimes, especially if he is cramming notes into a phrase which he is apt to do.  In that case he may just pick 1 of the 3 notes or 2 of the 4 notes on any given string. 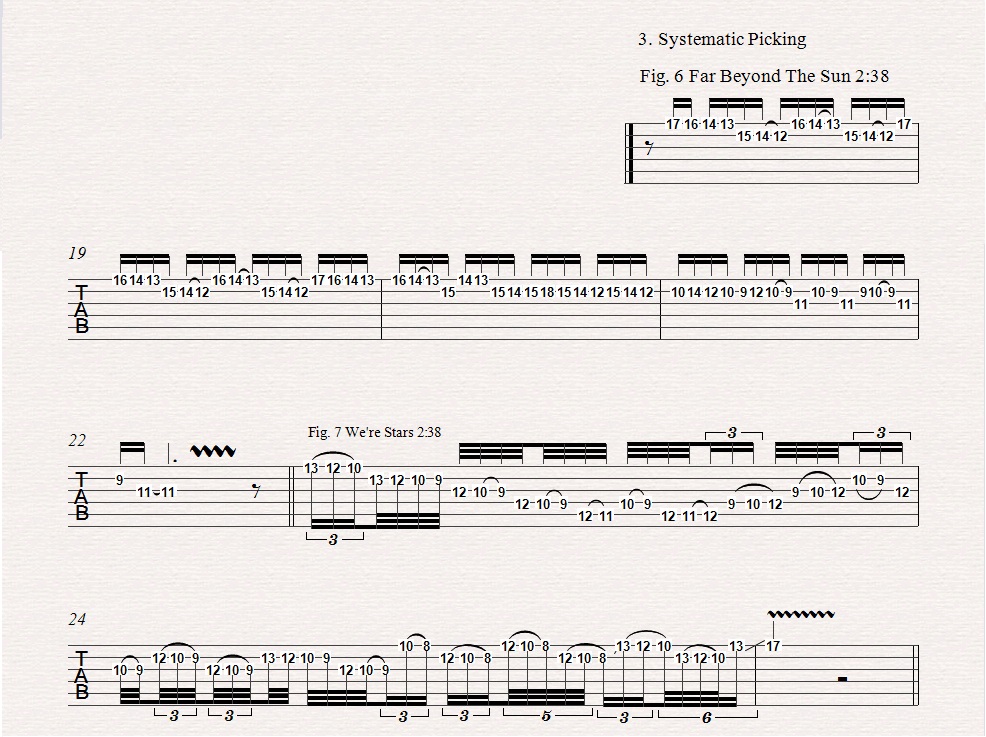 Yngwie uses 3 note per string type scales when ascending and utilizes rest stroke picking , otherwise know as economy picking. There will be 3 pick strokes per string and the last pick stroke is a downstroke which you allow to fall to the next string below (or above if talking pitch).  This will save 1 pick stroke per string as the pattern ascends because if it was alternate picked, every second string would end with an upstroke which is a wasted stroke.  This allows Yngwie to play very fast when doing ascending phrases.

Only the first lick in the intro to “Trilogy Suite “is economy picked.  After that Yngwie moves to a mostly legato approach for the last 2 phrases of the intro. 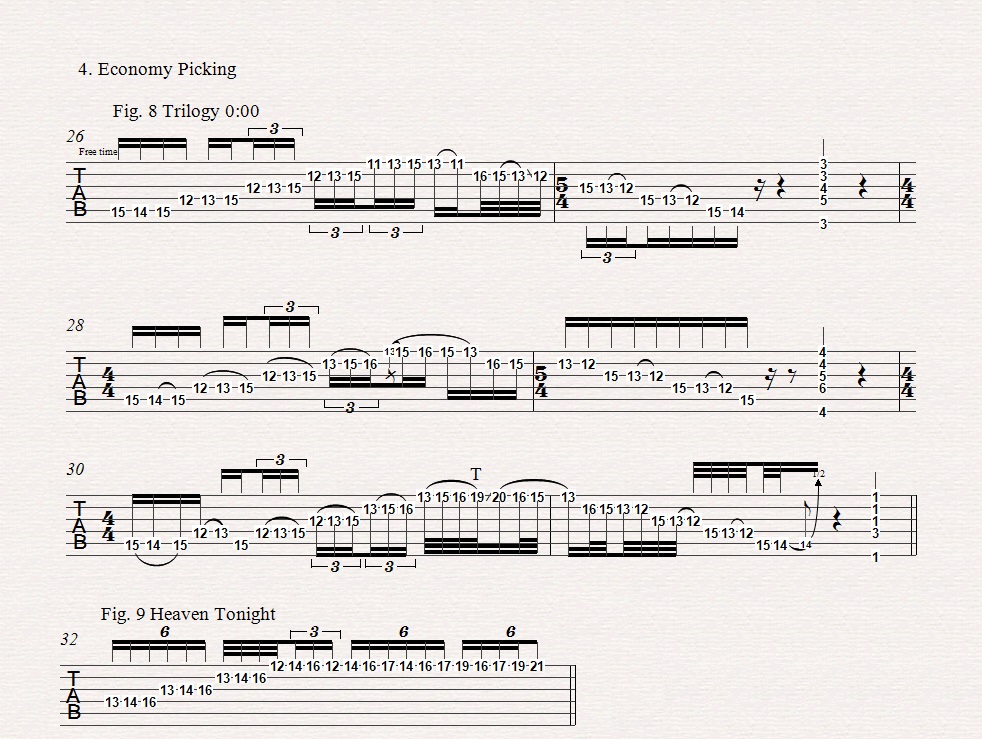 A sequence is a rhythmical grouping of notes that is repetetive throughout a passage.  Yngwie is very fond of groups of 4 and 6, both ascending and descending. He takes scale fragments and often will have a repeating theme he just moves throughout the scale.  These examples are both very typical of patterns Yngwie uses often. 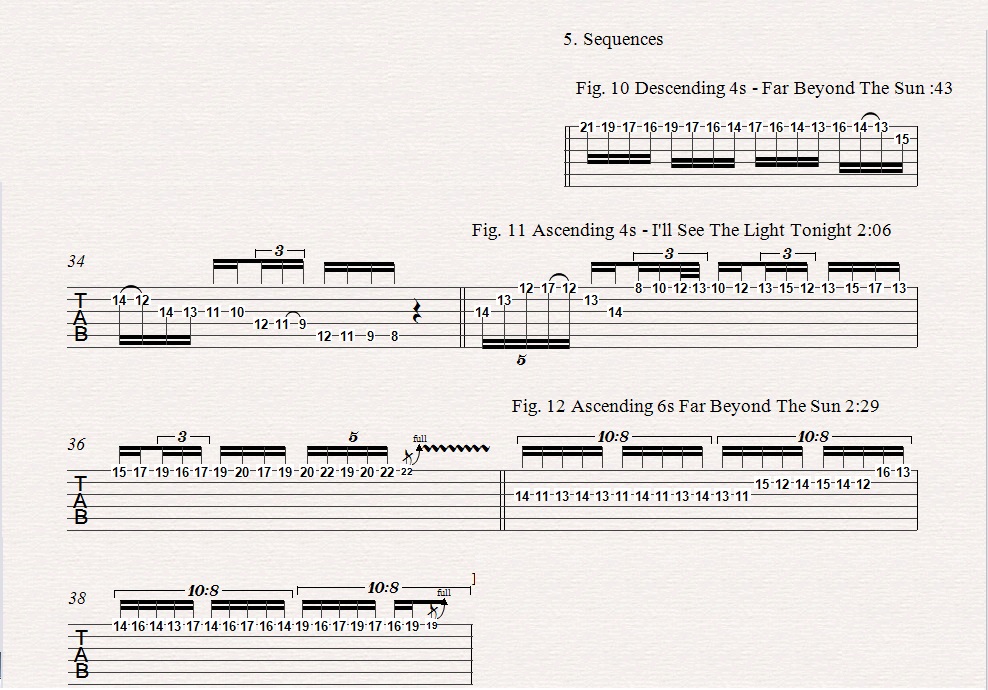 Yngwie has several approaches to arpeggios. One is a full sweep that he will do from the bass E string right through to the treble E string.  He also more rarely will pick a note on the ‘A’ string, play 2 notes on the D string (2nd note hammered) and then a sweep the last 3 strings.  Another way Yngwie uses arpeggios is a sweep done on 3 strings, usually G to treble E string.  He does this very often with the diminished 7 arpeggios he is fond of.  Yet another approach is his two string arpeggios where he picks two notes and hammers the 3rd.  There are at least 2 other approaches I have seen Yngwie take when approaching arpeggios but to save space I will save them for another lesson.

The diminished arpeggios he uses are really interesting and can be used in a variety of places. Theoretically this shape is the 7th chord of harmonic minor, but Yngwie loves to use it on the V chord in harmonic minor and move it around by intervals of a minor 3rd.   This makes sense because in case you did not know, diminished 7th chords are symmetrical.  That means the intervals are the same throughout the chord (all minor 3rds). The way I think of using this technique is to play it from the 2nd, 4th, b6 and bb7 of the minor key I am in. Another way to look at it is to play it from the b2, 3, 5, or b7 of the V7 chord.  When you play this over the Im chord, you play the diminished arpeggio and resolve on a note that belongs to the chord you are playing over.  No such resolution needs to  happen if you play it over the V7 chord as all the notes are chord tones with a b9 (which sounds wonderful on a dominant 7 chord).

If theory is something you want to understand better then I can definitely help you out. Hit me up for some private lessons and I can help you make sense of this stuff and much more, and you can start to use these techniques in your playing.

Pedal point is a classical music technique where a series of notes in a scale are played against a single note (often the root) of the scale at hand. Yngwie does this all the time.  The easiest way to do this is learn a scale on two adjacent strings.  Play the root of the scale then descend to the 7th, back to root, then 6th, root, 5th root, etc.  That is one example of pedal point that is usable in a lead guitar context.

Yngwie’s tapping technique pops up now and again in his solos.  He likes to use the middle finger of his pick hand while holding the pick to get these notes vs the way EVH uses his index finger while palming the pick.  Yngwie is definitely not a hi tech tapper.  He uses this technique more as an extension on licks to get a higher note so he can remain in the same position without shifting his left hand.

Yngwie is often discussed in terms of being a shredder and little more, but that could not be further from the truth. He can play with melody and feeling as well as any melodic feel player I have ever heard, he just chooses to do it sparingly. This solo in “You Don’t Remember” is a great example, another is the first part of the solo to “Queen in Love.” Very emotional playing and of course, he has to shred at the end because, well, he’s Yngwie lol! 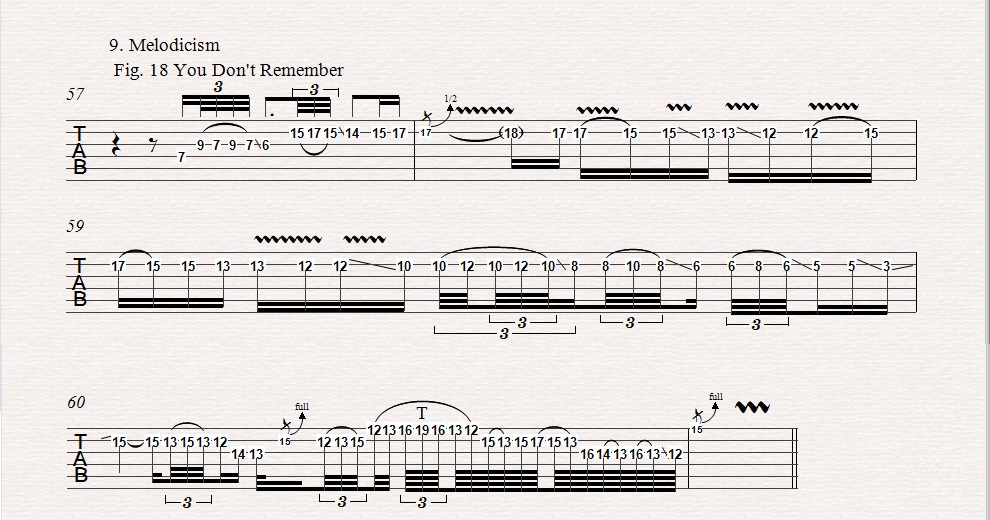 Yngwie has admitted to being influenced or at least enjoying the playing of Allan Holdsworth, and this example sounds like something Allan might play.  The hardest part about this lick is probably trying to feel it AND keeping the strings in tune.  I wrote the time into the transcription, but I think that would be a last resort type of thing.  Try to feel the phrasing if you can.  If you just cannot, then break it down, half a bar at a time, counting if you understand how to read music rhythms. If you really do not know but want to learn, again, seek out an instructor such as myself.  I can teach you how to read any rhythm you would ever encounter in music or tabulature.

As for keeping the Fender vibrato in tune, that is a whole other matter. These vibratos are very unstable and so a few precautions you can take to try to keep it in tune better are; releasing the strings from any string trees, putting graphite in the nut slots under strings (a pencil does the trick), using very few windings around the tuning peg, use 3 or 4 springs (Yngwie uses 3). Yngwie floats his bridge about 1/8″ off the body of the guitar and that does add tuning instability, but that is the only way to get the vibrato that he does on single notes (going above and below pitch) with the bar.  One other more drastic option is to drill the holes deeper into the tremolo block where the strings go through, but I have never tried that, I have just read about John Suhr doing that for guitarists with Fender trems back in the 80s to help tuning stability. Seems drastic but hey, might be worth a try if you don’t care about perceived vintage value of your guitar. 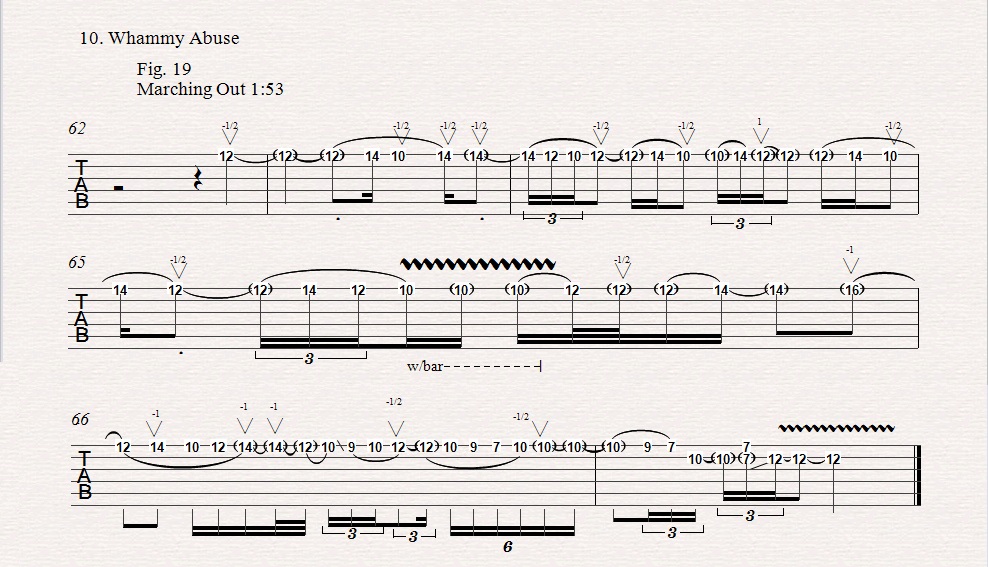 I hope you have enjoyed this video on Yngwie Malmsteen and I will see you soon!