So this week we are going to learn to duplicate some movable chords as well as a few basic notation symbols.

If you have never had music lessons before, you need to learn some basic concepts of time. To convey how long and how many times a chord is to
be played (or not to be played), we use symbols. These symbols look a little differentthan the ones used to read single notes. These are used strictly for chordal playing and they are called, “Stop Time” rhythm figures. 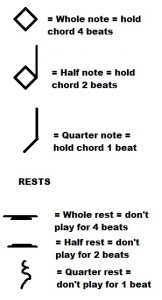 Memorize these symbols and what they mean and in the next few weeks as we will be using them to play chordal arrangements.

Now we are going to learn what are called, “movable chords,” meaning these chords have no open strings and can be moved to different places on the neck yet retain the samequality (major, minor etc.).

Remember that note naming exercise I had you do last week? Well, this week we are going to use that knowledge by duplicating chord voicings on the 6th string (E) and 5th string (A).

In my diagrams I have made the root (letter name) of each chord into a square.

Next up are the chords we will be using and the roots which we will be playing them from. 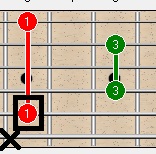 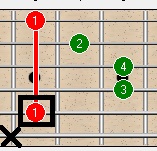 Okay, so we have two major and two minor chords with roots on 2 different strings. What I want you to do is duplicate the chords meaning play a chord from the root 6 voicing then do it again on the root 5 voicing.

There you just played C major in 2 places on the neck, congratulations!

Okay so now duplicate all of these chords:

With your knowledge of the fretboard after doing the note naming exercise, this should be pretty easy.

See the video if you are confused at all about what I
am asking you to do.

Soon we will delve into how to use these duplicates in a chord progression and within that context we will add our stop time rhythms.

Enjoy and have a safe and happy holiday!