Hi there, this week I am demonstrating C major scale, 2 fingerings for the scale which come in handy when playing certain styles of music as the title implies.

There are 5 positions of major scales but there are also 2 fingerings in each position that are very popular with guitarists and so I will show you both. The ‘jazz’ version has easy accessibility to the notes which is what you want when playing this pure improvisation music style. The ‘rock’ version enables the guitarist to play the scale rapidly which is common in many rock, hard rock and metal guitar solos.

Observe the fingerings for each scale. Start and end on the red notes. Numbers are fingers as follows: 1 = index 2 = middle 3 = ring 4 = pinky. 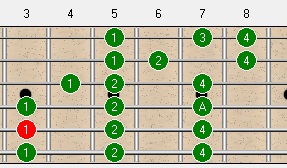 Below is the tablature for the scales (click to enlarge): 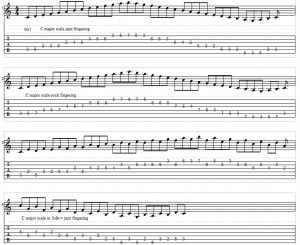 I have included an exercise for each scale to give you something to do after you have it memorized. The ‘jazz’ version I have written out what are called 3rds in the scale. This breaks up the scale and is a little more interesting than just running up and down the scale and also trains your ear to recognize intervals of a 3rd.

For the ‘rock’ version of the scale, I included a legato exercise. Only the first note of each grouping will be played with a downstroke, the rest of the notes will be either hammered on H or pulled off P.